Become A Member Donate Volunteer Member Login
Categories
Browse Dates
February 2011
Go to previous month
Go to next month
Information Parking is limited at Valhalla and often fills by 6:30pm. When our parking lot if full, you may park in the lot by the Green Gate on Highway 89 and walk into the venue. Please wear comfortable shoes and allow time to walk in in case parking lot is full.

If you have a handicapped sticker, plackard or plate there are several handicapped designated spaces.

If you have questions or require assistance please call or email us at least 24 hours in advance. 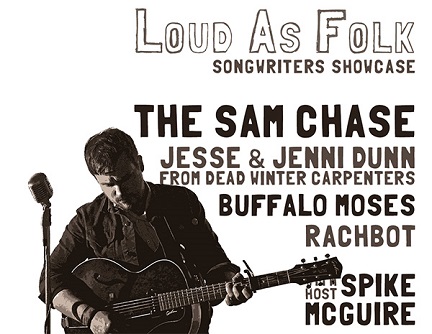 Loud As Folk is a songwriters showcase with a focus on highlighting emerging artists taking distinct approaches to all genres of American roots music. Loud As Folk was founded by Spike McGuire in 2011 as a monthly songwriters series in his hometown Reno, NV. Over the last 8 years the showcase has cemented itself as a hub of the west coast music circuit by hosting acts from around the world. Joining host Spike McGuire in the Valhalla revue will be: The Sam Chase (named Best Songwriter by SF Bay Guardian), Jesse & Jenni Dunn (from Dead Winter Carpenters), Buffalo Moses (from Buster Blue), and Rachbot (from Failure Machine). The Sam Chase hails from San Francisco, CA. Sam's performances range from hard rockin' drinking songs to sensitive ballads that tackle the inner workings of the human condition. He has released 3 albums with his band, The Sam Chase & The Untraditional, and has performed at Outside Lands, Hardly Strictly Bluegrass and High Sierra Music Festival. Crossing paths for the first time at a music festival in the Northern California hills, Jenni (fiddle/vocals) and Jesse Dunn (guitar/vocals) set off on a musical journey that has spanned nearly a decade. The duo helped spawn North Lake Tahoe based 5-piece bluegrass rockers Dead Winter Carpenters who they continue to record and tour nationally with today. The narrative storytelling in folk singer-songwriter Bryan Jones’ music brings to life an eclectic cast of characters only an inspired mind could conjure up. But Jones’ talent doesn’t end with the pen—his strong, bare vocal abilities are one to be reckoned with and have taken him across Europe and throughout the United Stats. Multi-instrumentalist Rachael McElhiney burst on to the folk scene with her band Buster Blue. When McElhiney isn’t tirelessly touring the west coast with her current trio Failure Machine, she performs solo as Rachbot. Whether singing a cappella or over the stark accompaniment of ukulele and baritone saxophone, Rachbot’s soulful voice takes command of any stage as she weaves stories of life, love, and lessons learned from her grandfather. Spike McGuire is an internationally touring songwriter endorsed by GraphTech Guitar Labs. He has spent the last decade drawing parallels between the ethos of punk rock and the spirit of folk music by building community and engaging listeners with his message. On the rich spectrum of folk music, Spike resides decidedly closer to Pete Seeger than Peter, Paul, and Mary.
Office: 530-541-4975
Info@ValhallaTahoe.com
PO Box 19273
South Lake Tahoe, CA 96151

Valhalla Tahoe is operated under special use permit with the U.S. Forest Service Lake Tahoe Basin Management Unit. In accordance with Federal law and U.S. Department of Agriculture policy, Valhalla Tahoe is prohibited from discriminating on the basis of race, color, national origin, sex, age, or disability. (Not all prohibited bases apply to all programs.) To file a complaint of discrimination: write USDA, Director, Office of Civil Rights, Room 326-W, Whitten Building, 1400 Independence Avenue, SW, Washington, D.C. 20250-9410 or call (202) 720-5964 (voice and TDD). USDA is an equal opportunity provider and employer.
© 2021 Valhalla Tahoe.